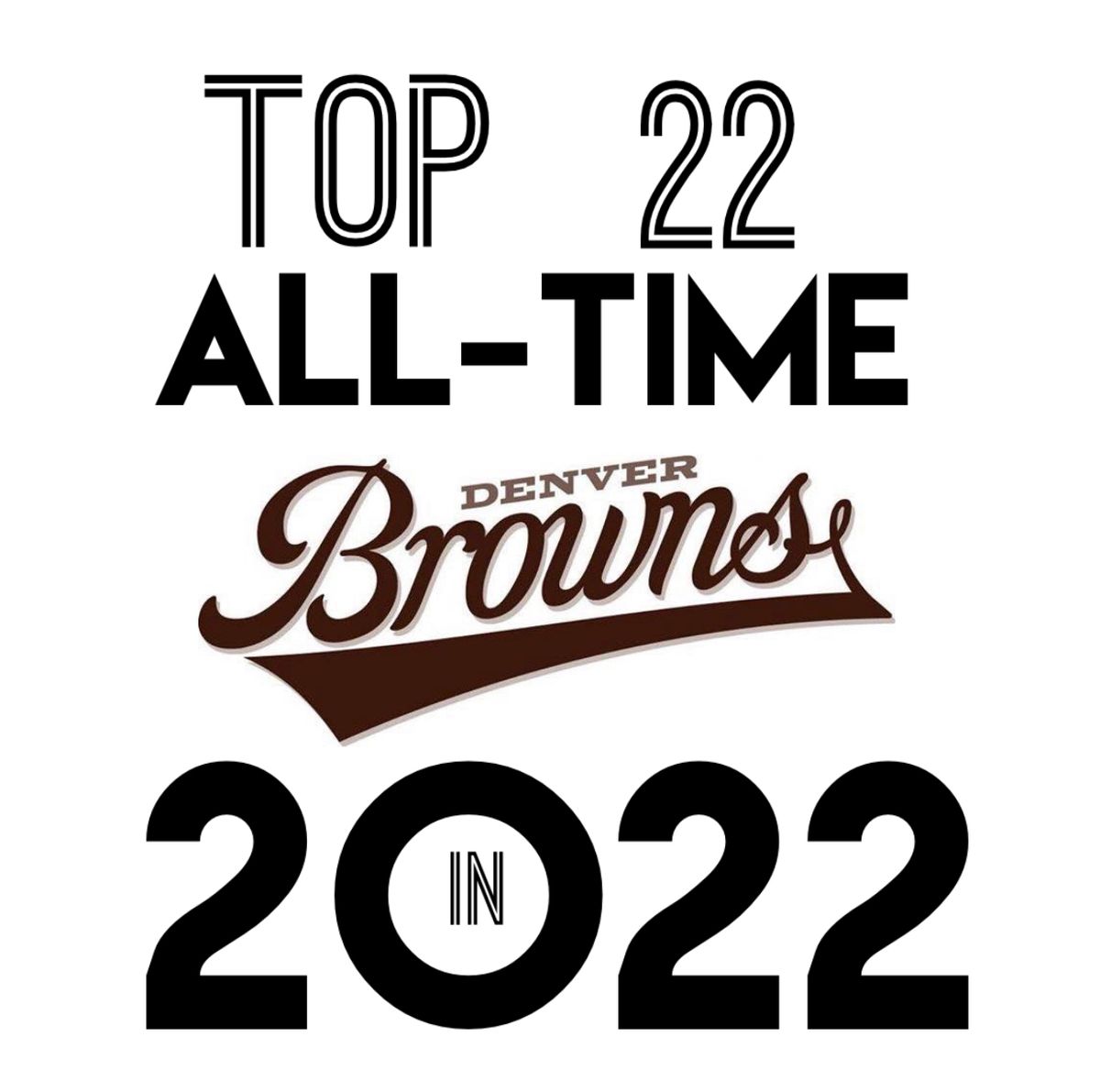 The Top 22 All-Time Denver Browns list launched today Tuesday 2/22/22 will take us up to Opening Day in an effort to raise awareness around our GoFundMe SAVE OPENING DAY campaign. The players are unveiled in no particular order, the list is not in order of better or worse with exception of player #1, Player #1 was the greatest to ever play for the Denver Nine.

Leading off the list of Denver Browns greats begins w/a player who has been on the team every single season (all 15) since 2007 and apropos wears #22 and typically leads off batting well over .400 for 15 years now 7-time City Champ and Regis U and Heritage HS Legend Denver Browns Hall of Fame’r who rhymes with runs... Jordan Bruns!

Another Denver Brown Great wore #22... for two seasons Jeremiah Batla flirted with perfection… 21-1 in 2010-2011 throwing the Browns 2nd No Hitter & striking fear in all who faced him.

Few embody the Denver Browns spirit like the guy who started it all… One of the most dominant pitchers in NABA history and the guy who always took the ball and gave you his all. Thank you G for all you’ve done for us and continue to do for the game of baseball.

All Time Leader in Hits, 7 City Championships. Endlessly clutch while playing impeccable D - Thank you TKut for 15 seasons of sheer excellence on the field. We’ve sure been lucky to have you turnin 2 all these years.

The coolest character and unselfish team oriented dude to dawn the Brown was undoubtedly “Captain Camp” who coined the phrase “Champions Never Panic”. Camp won us our first City Championship with a walk off in the 10th & was fearless on the field from 2007-2015 before he and wife Whitney left us for the Peace Corps.

The heartbeat of The Browns is the best 3rd baseman this City’s seen since (and long before) a guy named Nolan. A pure swing w/sure-handed D who famously once hit 5 (count’m FIVE) home runs in the same game. Thank you J-Reb for being the class of the NABA for over 20 years!

Part myth part legend all parts BALLPLAYER • The Browns GI Joe DiMaggio or Bullet Joe Rogan, he could do it all. An Ace on the mound who could play anywhere on the diamond. It’s believed Burley had a hit in every game he ever played in for the Browns 2007-2009 (40+ game HitStreak) We thank you Staff Sergeant Burley Burns for your sacrifice and service to America.

The Denver Browns all time leader in wins - “Ole Reliable” or “Ste-Rei” has been nothing but gold for years upon years. As our Ace, #2 or in relief none have been so big for so long. An adept OF/1B when not dealing he’s been a major reason for all our success over the years. Thank you Steve for all you’ve done for The Denver Browns Baseball Club

The Babe Ruth of the Denver Browns, Chase holds our all-time records for most HRs in a season (16) and Ks in single game (20) and above all was a truly great teammate. Chase’s GrandSlam in the 2013 Championship game was literally never found.

A charismatic natural whose hustle & leadership were only matched by the power of his colossal swing. A collegiate national champion that brought fire/determination. In Dan’s years wearing Brown the team win% was north of 900. In the National Tourney he once hit a 500ft. HR that sparked a 16-run come from behind rally in a must win matchup. The Heritage HS Legend always displayed unbridled enthusiasm and passion for the game of baseball. Dan Neumann we appreciate you.

Our Superman ACE the past 2 seasons has gone 18-2 w/a sub 2 era for the Browns being nothing short of dominant nearly every outing. Our Mt Rushmore of starters has a new face since Covid-19 and it’s undoubtedly Double H. Thanks Houston for raising the bar while a Denver Brown these past two seasons, your presence will be missed. Best of luck in Asheville NC

A supreme 5-tool talent, Huggy patrolled RF better then any in league history while possessing abilities few could match. Before Matty moved to PHX Denver NABA knew “Never run on Hug” was for real. Blasting baseballs into the stratosphere and hosing those who dared all over the yard was his MO.

Another 5-Tool Talent Tyson’s tip top gleaming defense was on display from 2009-14 helping us reach/win our first 2 championships while acting as our resident Rickey Henderson. Tyson was a terror, always on base and stealing bags before takin off to Texas. Miss you Ty-Martinez!

A monster in the clutch “CD” always comes through dropping bombs or dropping bunts the lefty finds countless ways in helping us win. An astute student of the game, Agent Number Nine knocks in runs, gets on base, moves runners over and hits for POWER while always sporting impeccable D. CD last summer on the 4th of July hit two GrandSlams in the same game; talk about fireworks! Thank you Chris Dennis for your continued service to youth baseball (The Denver Rage) and dedication to the game

The only Denver Brown to receive fan mail, Matt Barker stands for something much bigger than The Game, because what he stands for is inclusion within The Game. Few have braved his path as he is one of the only openly gay/bisexual baseball players in America. The former Rockies Draft Pick and All Colorado Player of the Year can play anywhere as he’s solidified our lineup since 2015 helping us win 5 City Championships in 7 years. Thank you Matt Barker for being you and setting the example for all that will follow on the ball field.

Another supreme talent the Niwot Natural has been nothing short of spectacular in his few years for the Browns. His last full season the Fireman went four for four in the Championship to round off his 500 batting average always displaying impeccable Defense at Short/1st. Connor Messenger, just another reason to #supportlocalbaseball

Whenever Zack suits up we mean business. The Oklahoman has served as the Denver Browns “Ringer” since 2015 making us extremely tuff to top for over a half decade. The longtime Lake Hefner Pelican flocks in for Browns games multiple times a season whether in PHX, 4th of July or Championships The Denver Browns can always count on Zack Humphrey. Thank you Humphrey Family for being a part of the Denver Browns Family.

The new face of the franchise, our starting shortstop for both the Denver Browns and affiliate Mile High Green Elephants the 25yr youngest member of the Top 22 takes Daddy hacks and can flat out fly. In PB We Trust… The futures so bright we have to wear shades (of Brown:)

Superman MJ Frank brings super POP when he swings and a CANNON off the bump. Our LF is a goof in the dugout but dead serious between the lines. Dropping double digit bombs in 2018, this Cowboy’s another reason The Denver Browns are favored in 2022.

Nearly closing out our list of All-Time Top 22’s The Denver Browns penultimate player/pitcher is the back of the bullpen where the buck stops. Busto’s Browns last line of defense w/an almost flawless record since taking the reins in 2016 he’s now our all-time leader in Saves. Thank you Lee for shoring up the back end time and time again. Stay tuned for tomorrow’s announcement of the GREATEST DENVER BROWN OF ALL-TIME!!

1. *ALL-TIME TOP 22* THE SHOHEI OHTANI OF HIS TIME - A World Champion MVP talent, no other Denver Brown has flown so high and sadly died so young as the incomparable #1 for all-time former 1879 Denver Brown Stocking Dave Foutz! - April Fools! Did you know The Denver Browns were the state of Colorado’s first fully professional sports team? Featuring none other than future Big League Phenom Dave Foutz! 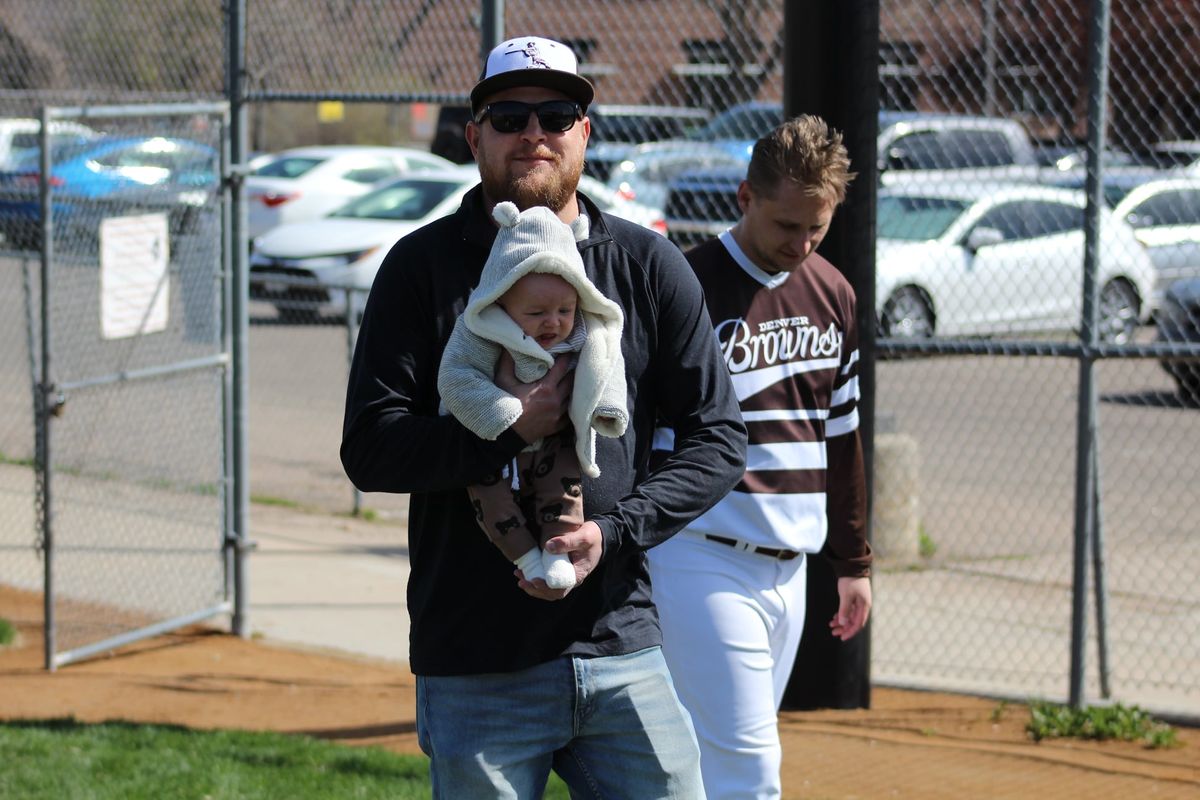